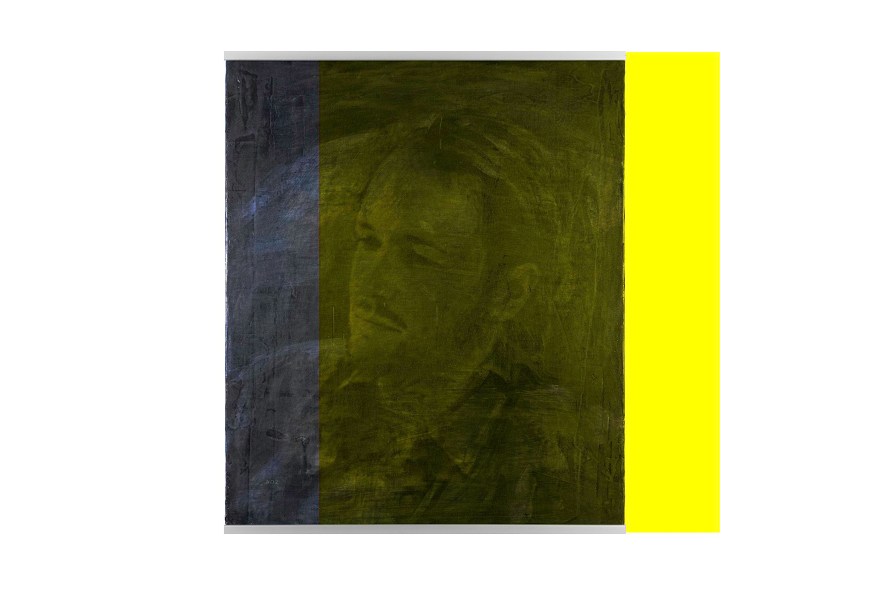 Pieter jan Martyn, A02 to rearrange all these thoughts in a moment, 2020, Galerie Frank Taal.

Painter Pieter jan Martyn (BE, 1986) is an artist who conducts thorough historical research and knows which series he will be making in the coming years. For his first exhibition at Frank Taal Gallery, Martyn wanted to find out what he would paint if he could get rid of all the preparation and baggage. He relinquished control and his consciousness by collaborating with a well-known hypnotist. "A confronting experience," said Martyn.

In the past Martyn made series about the Red Army Faction, the Gang of Nivelles and the Nuremberg Processes. Historical documents, such as well-known press photos, were always his starting point for his paintings. Iconic photos familiar to most of us. Initially, Martyn imitates them, but gradually he combines the factual with the fictional. For example, he stages images that use the same formal aesthetics as the press photos to provide possible scenarios about moments before or after.

For each series Martyn collaborates with someone from a different field. For his series about the Gang of Nivelles, a controversial series of unsolved robberies and murders from the 1980s, he collaborated with investigative journalist Jonas Bruyneel. The collaboration resulted in new perspectives that were later investigated by the police. For his gallery exhibitions in Germany, Martyn collaborated with critics and curators. An interaction from which resulted in the themes of his subsequent exhibitions. For his first show in the Netherlands, Martyn was allowed a free hand and decided to find out what he would paint from his subconscious mind.

It seems to me a considerable step to move from working on the basis of historical source research to working under hypnosis.

That's right. Normally, I work in series of which the theme is fixed in advance. I only make work that fits in that series. Nothing else. That way I also know which series I will make in the next 3 years. Thematically, my exhibitions are always quite distant from me. This time around, I wanted to find out what I would paint if I worked intuitively, from my subconscious mind. Would I then paint something fundamentally different, for example tigers?

Why did you choose to be hypnotized?

The original idea was to work with a psychologist. I decided against that, because you can still control those conversations to a certain extent. At first, I was skeptical about hypnosis. What if it doesn't work? I had already made lists of topics in case I wouldn't be susceptible to it. But that turned out not to be the case. During the first session I thought in advance, I’ll just participate and see how it goes, but a few minutes later Patrick Pickart, the hypnotist, told me my hand was stuck to my face and from that moment there was no way I could free my hand. 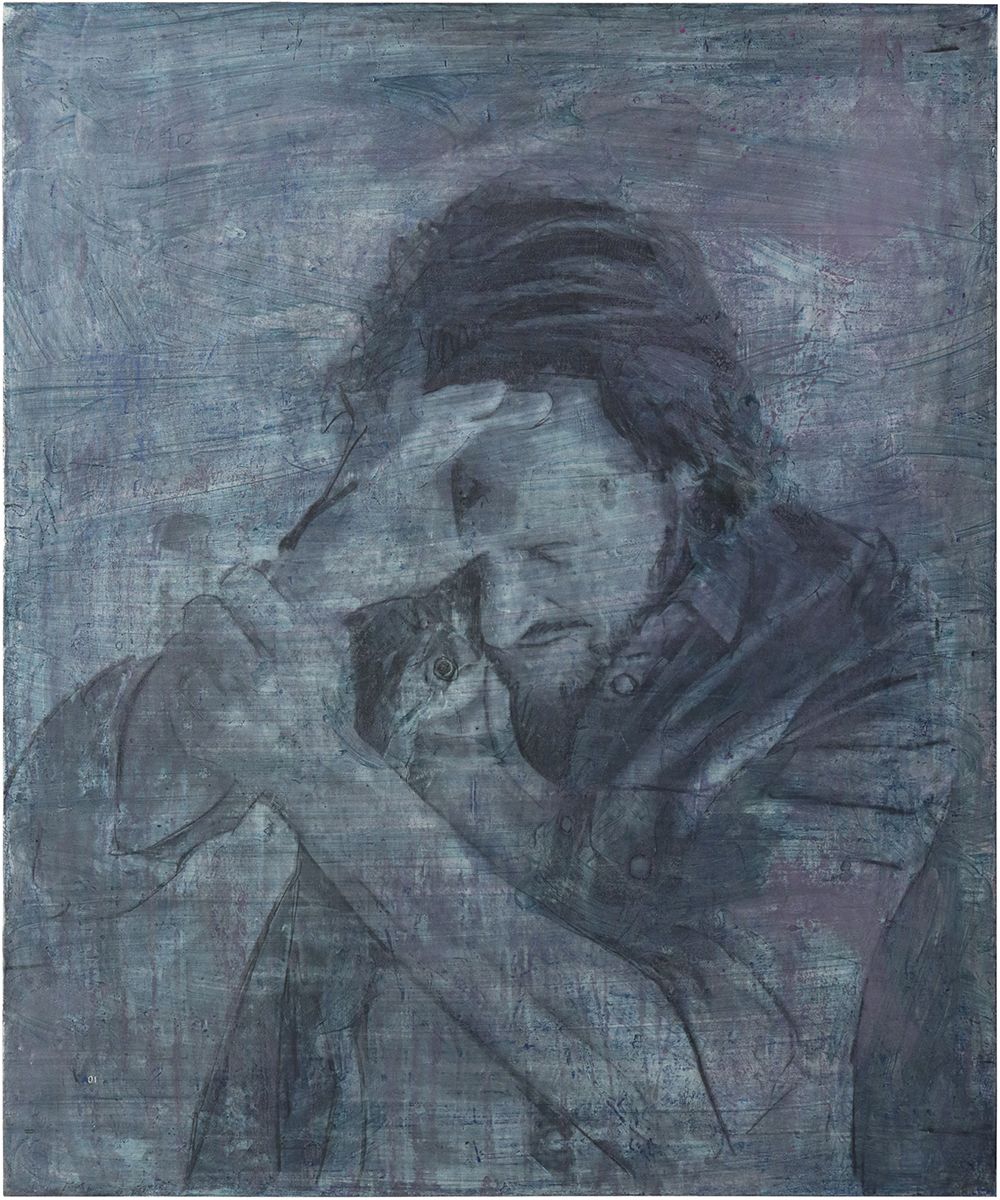 In the Netherlands, hypnosis is widely viewed as a form of entertainment. Is that also the case in Belgium and does that also partly explain your scepticism?

That is also the case here. I knew Patrick from television shows, but got to know him personally through my brother-in-law. There is a group of people who do not want to be put under anaesthesia, for them hypnosis is a good alternative. Patrick was keen to participate because the typical art audience is a different audience than those who attend his theatre shows. By participating in my project he wanted to show that hypnosis is suitable for more than just entertainment. 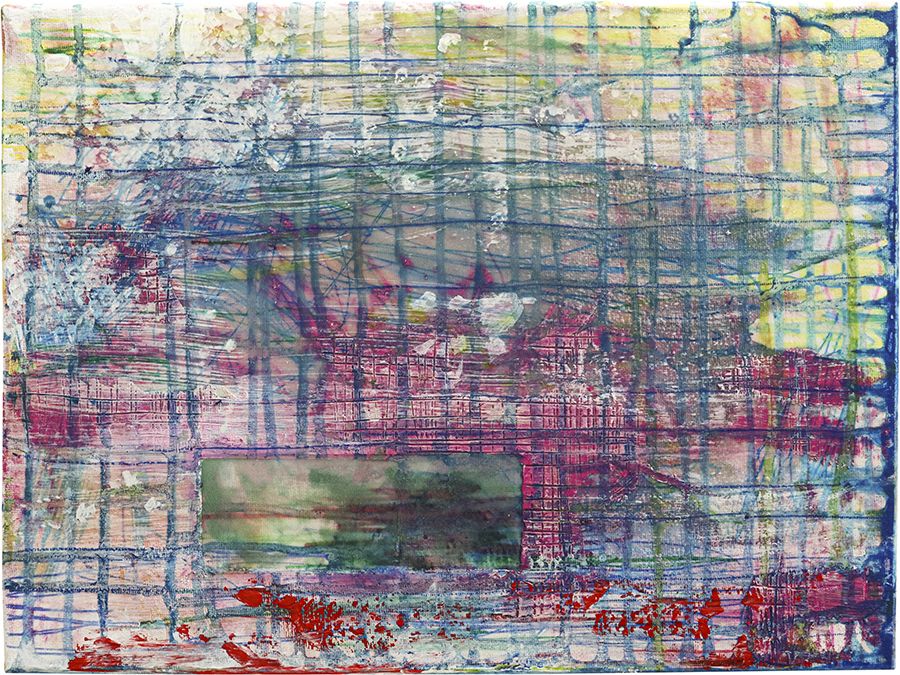 What exactly is hypnosis and how do you work when hypnotised?

Patrick told me that hypnosis is in fact nothing more than a great focus on one thing, to such an extent that other things are simply not perceived. A good example is that you are reading, absorbed in it, and your wife calls you 4 times that dinner is ready.

The first time the hypnosis lasted only 3 to 4 minutes. I had prepared everything in advance so that no time would be lost. The canvases were made in several sessions. My wife was present in the studio and saw that I was working like crazy. She saw that I was moving very angularly and that all my muscles were tight. Afterwards I also had muscle pain. The following sessions I had more confidence in Patrick and I dared to let go of everything faster, the hypnosis also lasted longer, between 15 and 20 minutes.

The strangest of all is when the hypnosis wears off and you are still working. It is very confronting when you think you are drawing a thin grey line, and you notice that it is a thick purple one instead. Then comes the realization that you painted something completely different from what you had in mind, yet whenever I look at the abstract results, I see the figurations that I had in mind during the hypnosis.

This all took place during the pandemic, because of which your exhibition was postponed twice. Did that affect the work?

We could do more hypnosis sessions. So I was able to further explore the possibilities of this. In addition, everyone suddenly had time, so I came up with Jonas Bruyneel to record the sessions. Jonas' brother Hannes is a director. Together they made a short film documentary about the project. I would like to emphasize that although I did the voice over, I am not otherwise involved in the film. The is written by Jonas, while Hannes directed and edited the film. The documentary is in fact a video version of the file that I normally create, only this file is made during the project and with myself as the subject.

Why is the exhibition titled The 12th Monkey?

The title is a reference to Terry Gilliam’s 12 Monkeys, a 1995 film starring Brad Pitt. Like my project, 12 Monkeys is based on Chris Marker's short film La Jetée (1962). In that film the protagonist, like me, is rooting in his subconscious mind through a form of hypnosis. The documentary by Jonas and Hannes also contains visual references to La Jetée.

What did this journey in your subconscious mind give you?

My wife recognized my handwriting in the works that I painted under hypnosis and noticed elements from work I produced 10 to 15 years ago. We then looked through my work from that period on the computer and she turned out to be right. The same expressive writing appears in many of my older works, but not so much in the foreground. At the time, I did not so much paint the figuration, but rather the background that defines the rather suggestive figuration. Like Jonas concludes in his text: “Maybe that's who I am: a painter of emptiness? Perhaps that's what painting under hypnosis has done to me: frees me from the stories that I obsessively collected and from the fear that kept me from being completely free. So that only the essence remains: that immeasurable emptiness.”

Watch the short documentary about The 12th Monkey by Jonas and Hannes Bruyneel here.

Pieter Jan Martyn's The 12th Monkey is on display from 27 March to 29 May at Frank Taal in Rotterdam.
Visits are currently only possible by appointment.
Book your online ticket for free here. See franktaal.nl for more information.