Sincerely Not Yours – Hester Scheurwater 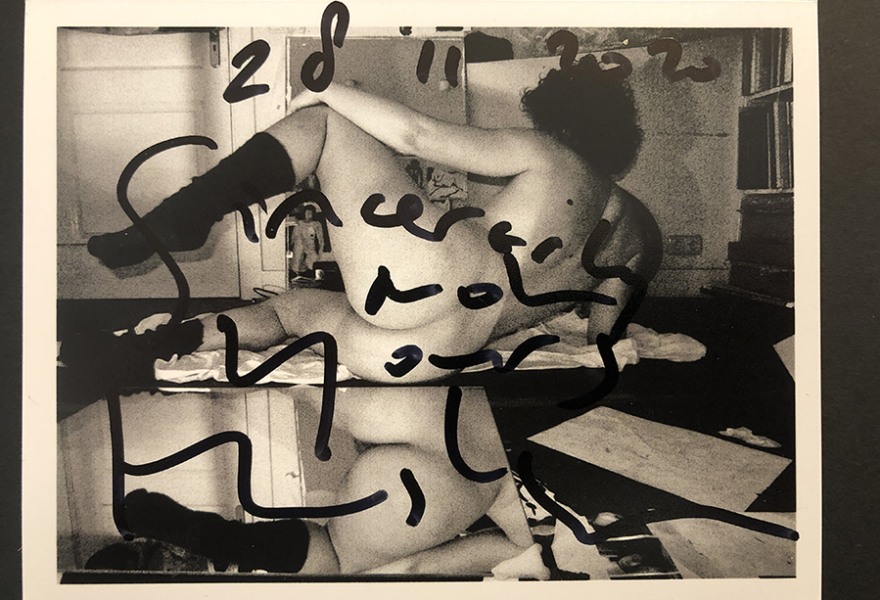 Most of the works in Hester Scheurwater's Sincerely Not Yours exhibition have been shown before. Posters of her naked self-portrait were displayed throughout Rotterdam. You could come across other works in the form of stickers attached to lampposts and traffic lights. Together they formed a pamphlet in the public space. A pamphlet against prudishness and for the discussion of visual taboos. A visual commentary on a one-sided image of women in the media.

Hester Scheurwater's work is sexually explicit and is often described as shocking. Using explicit images, she investigates and criticizes the role of women as an object of lust and stimulate a discussion about our visual culture and the sexualisation of society. To achieve the latter, she often places her work in public space. This can be our physical environment, but also online

For her previous series Shooting Back (2011) and All I ever wanted (2015), Scheurwater posed in front of a mirror and produced many of the works with her mobile phone. "These mirrored self-portraits are my way of responding to the imitated and false images in the media that constantly capture our imaginations. I try to deconstruct the effect of this call with my responses by changing the subject-object relationship, without becoming a victim of it myself."

For Sincerely Not Yours, Hester Scheurwater worked with models for the time in her career. A year and a half ago she made an appeal to women on Facebook. “Looking for female models (18+) to pose | unpose for me. I love your age, curves, scars and above all your vibes.” This short message resulted in dozens of responses. In the end Scheurwater worked with 6 models. “There were many doubters among them. Women who wanted to pose for me, but did not know if they dared and had questions. I had discussions with a number of them about participating. One of them was a friend of mine. I asked her to participate, she initially declined the offer. Later she felt flattered and agreed”.

Your previous series consisted exclusively of self-portraits. Why did you decide to work with models this time and is how is that different?

I was looking for women with kindred ideas and wanted to put them on a pedestal. Because of the type of photos I make, it took me a long time to figure out how to use them. Eventually, I came up with a selection of photos that I had printed as a poster, sticker and as a postcard. Those post cards were sent to places all over the world, to Spain, Japan and Taiwan.

Can you briefly explain which point you want to make?

This project is a response to the sweet, neat and one-sided image of women in the media. My self-portrait, for example, is an antitype, an imperfect picture. For me it is a perfect picture, but it is not a picture of painted nails in an orange to serve as a metaphor for a vagina. The point is that many of these photos taken by women (the female gaze) do just as little justice to sexuality and eroticism as the photos taken by men before. That is why I also wanted to organize a "dirty" evening with the theme hard, harder, hardest to talk about the things that you can no longer talk about these days. Unfortunately, that night has been postponed due to the current restrictions.

Is that also the reason that your work is stylistically related to that of men like Gerard Fieret and Paul Kooiker, artists for whom beauty is not the same as a pretty picture?

Perhaps unconsciously at most. I have been working on this subject for so long and over the years I have collected so much information and images about that I could be influenced indirectly.

Why did you decide to show this work in public space first?

I have been working in public space for a long time. Prior the photo projects, I made videos that I projected onto buildings. Shooting Back took place entirely on Facebook, which is by and large a digital public space. For this project I decided to use the physical public space again. This "formal" gallery exhibition is, in a sense, a completion of this part of the project. Yet, I also regard it as a start, because there are more models I would like to work with.

The exhibition is called Sincerly Not Yours, why that title?

The title refers to my previous series Shooting Back. I received a lot of reactions and unsolicited attention mainly from men. It often started in a friendly manner, but when I indicated what the project was about for me, it regularly turned into hate mail. I also received a lot of dick pics. With this title I want to indicate that I do not make the work for those people. Not for someone else’s pleasure.