Distance and proximity in the poetic works of Stéphanie Saadé 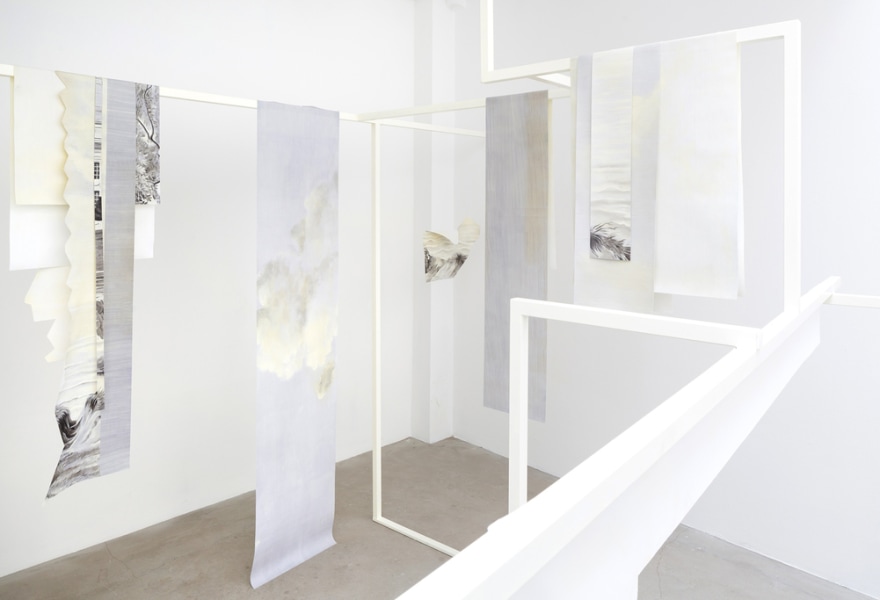 Stéphanie Saadé creates poetic artworks that are often intensely personal. Yet the opposite is equally true, because when you really think about it: what does she reveal exactly? In 2016, for example, she exhibited a gilded house key at AKINCI Gallery, a work of art that implicitly seemed to offer the buyer her trust and hospitality. Because gold is a soft metal, you can see and feel how the key has been used. In "Elastic Distance" (2017), Saadé showed the viewer an iPhone that indicated her exact distance from the viewer, precise in meters. Sometimes that would be just a few meters, other times the distance measured thousands of kilometers. The phone is connected to the one that she uses every day. That is why you can follow her movements, but at the same time, those movements are never concrete: you never know exactly where she is. For the work "Golden Memories" (2015) Saadé used personal childhood photos, which she then covered with a layer of 24 carat gold, effectively making the memory inaccessible. With these works she simultaneously creates distance and proximity, moving on the boundary between the private and the public sphere. As a viewer, you become a part of something, but at the same time you’re excluded. That is why her works create a certain tension and alienation. AKINCI Gallery is currently showing a solo exhibition of her work: "Sleeping Under the Shadow of an Unknown Tree”.

'Sleeping Under the Shadow of an Unknown Tree', 2020, overview at AKINCI.

Stéphanie Saadé is cosmopolitan: she divides her time between Beirut and Paris, where she obtained her bachelor's degree in Fine Arts. After that, she trained at the China Academy of Arts in Hangzhou before completing residencies at the Jan van Eyck Academy in Maastricht and the Cité Internationale des arts in Paris. Yet her work is often interpreted solely in terms of her Lebanese background. Saadé: “When you are a Lebanese artist, people usually approach your work looking for the side in it that relates to your background and the political situation in your country. There is an expectation, that I have always refused to fulfil. From another side, if you are a Lebanese artist, and you live in Lebanon, you can hardly escape certain political or historical issues, because whatever you choose to work on, you always fall back on them. I choose not to deal with these subjects in a frontal, or obvious, way but prefer to dissolve them in the “dough” the works are made from, which also contains wider subjects, such as psychology, that allow the works to transcend them. In each work are enclosed many layers of meaning, that can lead to many related possible understandings, and the political one is only one of them.”

The works shown in the exhibition in AKINCI Gallery were largely made before October 2019, but as a viewer you can hardly look at them without thinking about the recent period. Because Lebanon has had a particularly turbulent year. In October 2019, the October Revolution erupted in the form of peaceful mass protests against the mismanagement by a corrupt government that is demanding unreasonable taxes — it included a WhatsApp tax. The healthcare system is so hyper-capitalist that people die on the doorsteps of hospitals. Chronic shortages of everyday necessities like gasoline and flour also pose problems. Shortly before the protests, dangerous forest fires had already shown how underfunded the fire service was and to what extent citizens would be forced to rely on themselves and charity in the event of a catastrophe. The protests were followed by a severe devaluation - and later inflation - of the Lebanese currency, which meant that a lot of Lebanese people watched their savings evaporate. Many people queued in front of their banks. In 2020, the corona crisis hit, followed by the August 4 explosion that devastated half of Beirut - the largest non-nuclear explosion of the 21st century. Nearly 300,000 people became instantly homeless and the total damage is estimated at around 15 billion euros. Saadé: “At the time of the explosion, I was home with my partner, Charbel-joseph H. Boutros, in our apartment near the harbor. In one instant, our building was reduced to a skeleton. Nothing remained from it other than its initial concrete structure. It contrasted greatly with the chaos inside. We left right away, without being able to close our door—there was no door left—and took the car.” Incidentally, this means that the golden key, exhibited at AKINCI Gallery in 2016, is the only physical remnant of Saadé's home in Beirut. 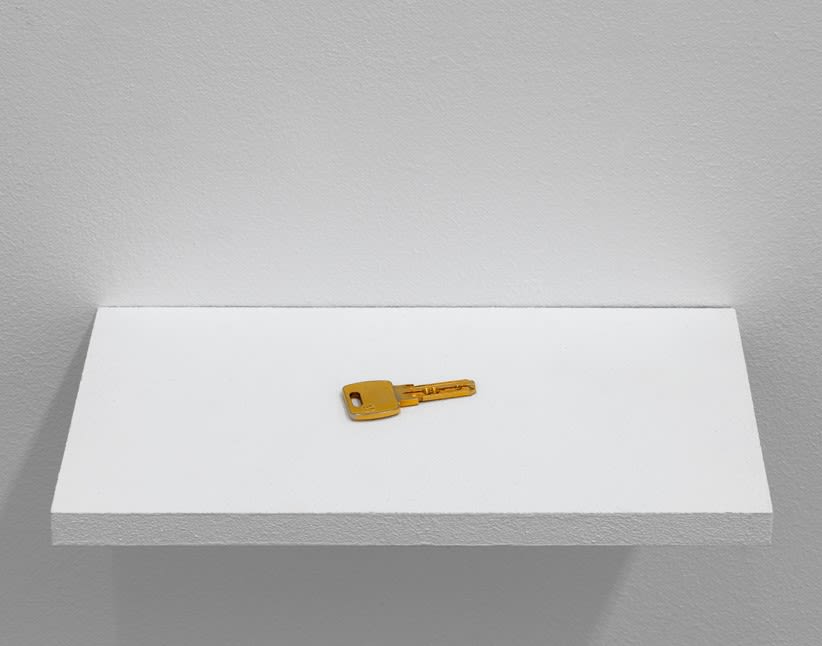 When you enter the exhibition 'Sleeping Under the Shadow of an Unknown Tree' in AKINCI Gallery, you will first see a large installation made up of ten embroidered curtains. The embroidered lines represent the topographical routes of several formative journeys that Saadé made between 1995 and 2001: the period between the moment when the curtains were hung and the moment when she left her parental home. But it is also the period that followed the Lebanese Civil War (1975-1990), when traveling suddenly became much easier and safer. The curtains offer something that’s incredibly personal and intimate: you can see the physical traces of how they’ve been used and the ways in which light, time, dust and moisture have left their marks - and wrinkles. Yet you do not learn anything personal or substantive about the travels that Saadé made. In a new space, the gallery, the curtains also gain a different context, with a visibly lower ceiling than the room they originally hung in. It feels like an invitation to fantasize about the space these curtains originally belonged in. Another surprising work in the exhibition is an oil painting that has been in Saadé’s family for generations. During the war, the peaceful landscape was damaged by shrapnel, causing it to disintegrate in a remarkable way. In "Digiprint," she shares the physical traces of her fingerprints on her phone, in the form of an abstract imprint of fat, sweat and skin cells. In this exhibition, we also see a long chain that falls downwards, forming a heap on the floor. The 2832 pearls on the chain originate from a mysterious German factory that no longer exists. Moreover, there are exactly 2,832 days between the end of the Lebanese Civil War and the birth of the artist. In this exhibition, Saadé offers us an exciting space that moves between vulnerability and distance. 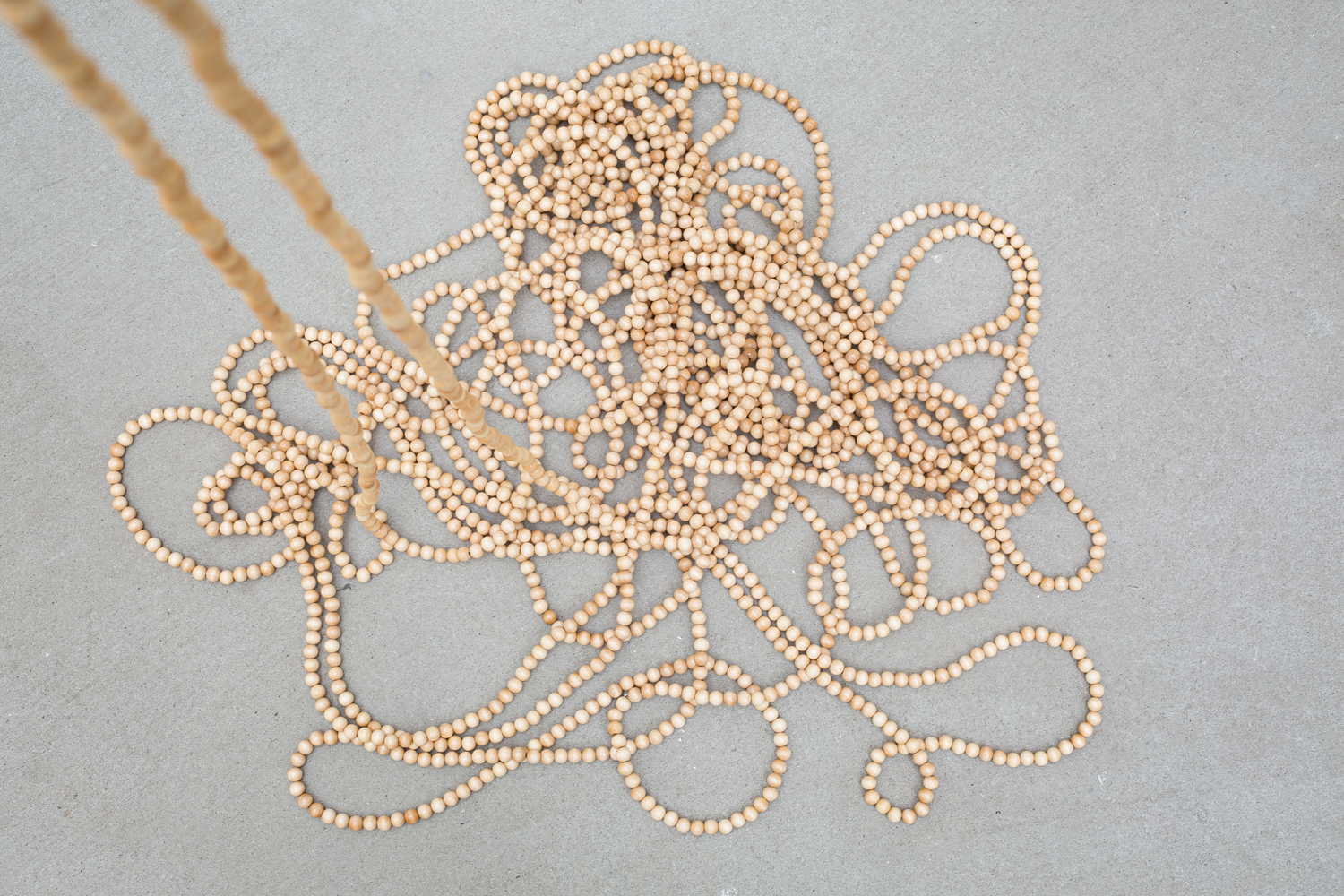 The exhibition "Sleeping Under the Shadow of an Unknown Tree" will be on view until November 21 at AKINCI Gallery in Amsterdam.
Tip: Make sure to check the latest developments in the gallery prior to your visit.