A day with Mariken Wessels 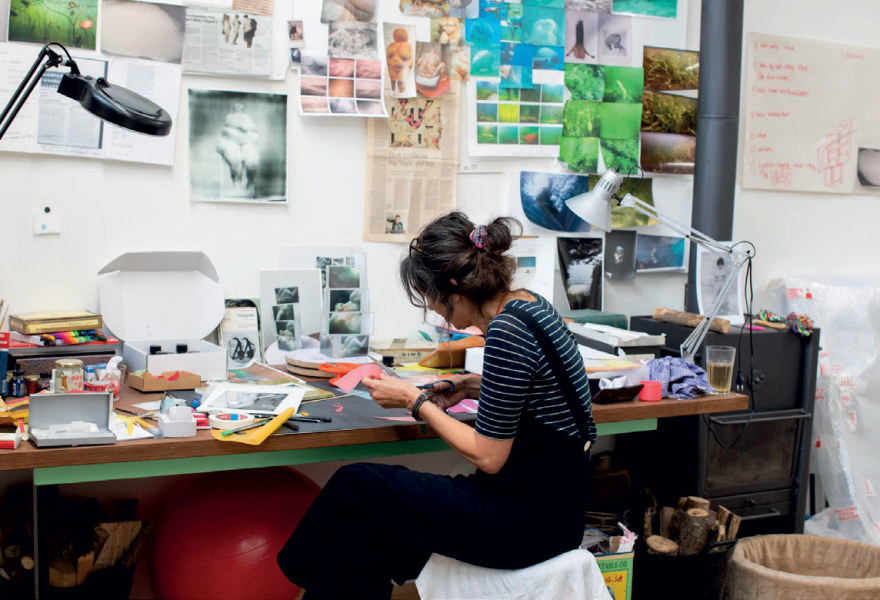 In a former publishing house nestled among Amsterdam’s famous canals, Dutch artist Mariken Wessels creates new narratives entirely of her own design. Applying a variety of media – from photography to sculpture – the erstwhile actress draws inspiration from Eadweard Muybridge’s pioneering studies of motion to explore human bodies and behaviours. Here, Wessels outlines her process, her background, and the important history of the building her studio now inhabits.

ID:  What drew you to photography initially?

MW: I grew up in Breda – a city in the south of the Netherlands – and worked in the theatre there during high school. I did all sorts of odd-jobs: making coffee, selling tickets, helping out with the shows… The theatre companies often rehearsed in the main hall and I was allowed to watch and even photograph the actors on-set. That was my first contact with photography and the beginning of my love for the medium.

As a child, my favourite toy was a View-Master: one of those plastic stereoscopes where you put in a reel of slides to view them in 3-D. The reels I found most exciting were the ones where the story was missing a few images, because it meant I could make it start or end differently each time. Maybe that’s where my love of watching and creating narratives really began.

Eventually, I went to drama school in Amsterdam. I never stopped taking photos and even had a small darkroom in my bathroom. After graduating and working as an actress for a number of years, I wanted more autonomy; I was tired of performing fixed roles. That’s what inspired me to become an artist.

ID:  How has this background in acting and theatre influenced your artistic practice?

MW: As an actress, I discovered how to build a role. You learn to ask yourself lots of questions: Where’s my character from? Where are they going? What’s their goal? It’s an approach I still use in my artistic practice. I write the answers on large sheets of paper and hang them on the wall, adding anything that has to do with each person, environment or story. It’s often very intuitive.

In the beginning I look for facts, but later on I let that go and collect anything that fits, or that’s consistent with the project. Then the making process begins; I might take photos, use archival materials or work with clay, collage, and even film. At that point, anything’s possible because I’ve set my framework and I can move freely between whichever media I choose within that frame.

ID:  How do you combine these different materials and visual approaches?

MW: It’s really a process. In one instance – at a Spanish flea market – I bought an old photograph of a group of people standing around a tree stump. It was small and pretty ordinary, but I found it intriguing. I made a copy and started to work with cut and paste. I then used the image as a basis for a few small clay sculptures, turning the tree stump into a tangle of bodies with clumps of legs instead of roots.

At around the same time, I came across an Eadweard Muybridge photoengraving at an auction. Titled Nude woman arising from the ground, it consists of multiple frames examining the movements of an obese woman as she stands up from a lying position. These frames became models for a number of large ceramic sculptures, the weight of which then inspired me to photograph similarly large women in a different environment: underwater. I wanted to investigate the change in behaviour of a heavy body once gravity was reduced. Now I’m exploring these same ideas through film and in book form. I’m calling the work nude - arising from the ground, to point back to the Muybridge photo-engraving that triggered this line of enquiry.

ID: This interest in bodies and movement seems to be something of a recurring theme in your work. What inspires this focus?

MW: People fascinate me. That’s part of the reason I went to drama school. One of the things I enjoyed most was observing people and then translating those observations into roles I could perform. That hasn’t really changed. People have always intrigued me, and that obsession is at the heart of almost all of my projects.

Muybridge’s work is another big source of inspiration, particularly the way he recorded the minutiae of daily movements. There’s the series I’ve been working with directly, but there are so many others as well. From a woman emptying a bucket of water to a child crawling, Muybridge shows life in all its simplicity and I find that moving.

Within my work, you can of course ask yourself what’s true and what’s imagined, but you can ask that about everything!

ID: It’s difficult to determine what’s true and what’s fabricated in your projects, especially those that use archival imagery the viewer is left guessing where the archive ends and the artistic intervention begins. How do you exploit this relationship between fact and fiction?

MW: Within my work, you can of course ask yourself what’s true and what’s imagined, but you can ask that about everything! Things are often presented as facts, but how truthful are facts? I take the liberty of using materials from different disciplines to tell my story in a way that’s convincing. When a work’s finished, it’s not important to me which parts I created from scratch and which were found materials because everything I’ve used has been changed or placed in a new context. Within this framework, I always try to maintain the possibility of truth.

ID:  Tell us a little bit about your studio.

MW: My studio is located in the 17th century centre of Amsterdam, and there was a printing company in this building during World War II. in 1944, Frans Duwaer – the then director – was arrested here and executed a few days later. Duwaer and his staff had been using the equipment to forge illegal ID cards and birth certificates for Jewish citizens and people from the resistance. They saved a lot of lives. More recently, the complex was converted into artists’ studios. I moved into my own studio here in 2008.

ID:  What are you working on at the moment?

MW: Right now, I’m preparing for a few upcoming exhibitions. I have a solo show at The Ravestijn Gallery in Amsterdam in the spring, whilst the nude - arising from the ground work will be part of a group show at Leeuwarden’s Princessehof National Museum of Ceramics later this summer. I’m also working with Hans Gremmen from Fw:Books on a new publication about this work.

ID: Above all, what do you hope to communicate through your work?

MW: I’m fundamentally intrigued by human behaviour and the human body. This fascination is the driving force behind the stories and images I make, and I hope it resonates with the people who view them.

Mariken Wessels’ exhibition Nude – Arising from the ground is on show until 1st of July at The Ravestijn Gallery.