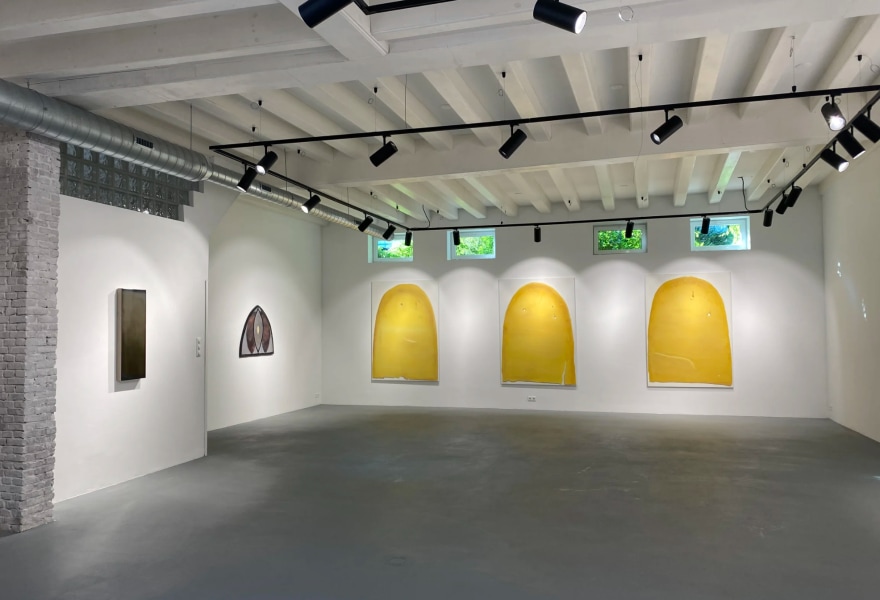 There is no crucifix to be seen, yet the group exhibition Hidden Remains at Galerie Fontana is about the impact of religious imagery in the work of contemporary artists. There are, however, three man-sized paintings of slices of cheese. At first, it may seem a bit far-fetched, but whoever sees the slices hanging in a row will immediately understand the reference to church windows.

Former gallerist Pieter Dobbelsteen (Cinnnamon, Rotterdam) curated an exhibition with works by Eva Spierenburg, Matthew Allen and Robert Roest. The hidden remains to which the title refers is the religious imagery that has nestled itself in our collective memory over the centuries. While the Christian faith in Western Europe has been on the decline for decades, the visual language still takes on many forms. Hidden Remains shows how this visual language subtly permeates the work of contemporary artists. Sometimes just a shape is enough, such as that of something banal like a slice of cheese.

Painter Robert Roest (NL, 1992) made the Casus series two years ago. This consists of five man-sized, hyper-realistically painted slices of cheese. At Fontana there are three hanging against the back wall. A scene that simultaneously comical and while hinting at something religious, due to the round tops of the slices, but above all that leaves the viewer puzzled. Who spends hours painting something mundane like a slice of cheese? Is there really a face in it or am I missing the point here? 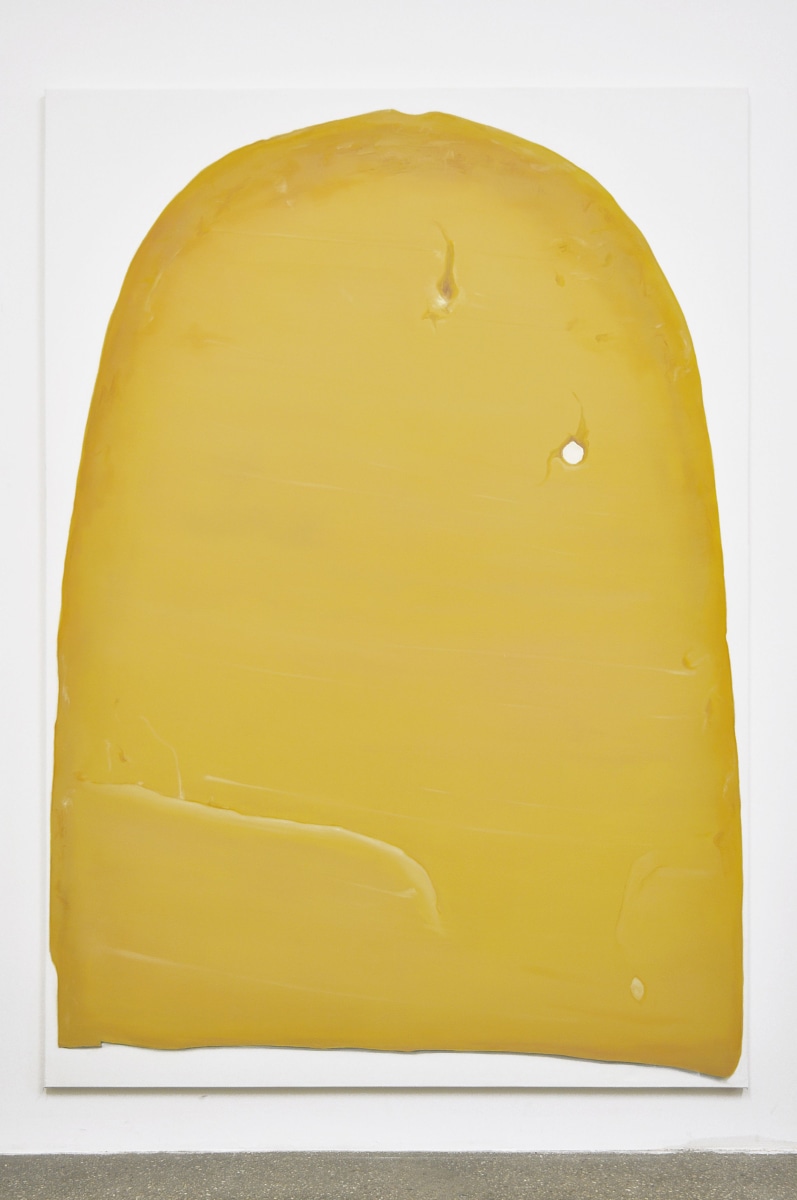 How did you come up with the idea to make a series of works about slices of cheese?
When I was still living in the Netherlands, it occurred to me to paint the slices of cheese I like to eat, but I was not convinced by the idea. Is there enough idea in there, I wondered? When I moved to the US, and my mother sent me cheese along with my birthday present, the idea came back. One of the slices had the shape of an emoticon-like face due to two holes at the top and a tear at the bottom. I thought it was too stupid to paint that, but I still wanted to make one to see if it could turn into something convincing. The series isn't about missing proper matured cheese in the US, but that has been the cause. Sometimes an inducement is quite banal, and I don't think that matters.

On your website you describe the series as caricature and sacred at the same time. Most viewers will get that caricature, but can you explain the sacred aspect?
Especially when grouped together in a white room they remind me of something sacred. We know large monochromes from serious minimalist painting à la Ellsworth Kelly. That kind of minimalist, sober work sometimes also has something sacred, well, we project that onto it as spectators. That work itself is what it is, paint and canvas. The shape of the cheese, with such a round top, reminds me of tombstones and massive walled windows from austere Romanesque churches. 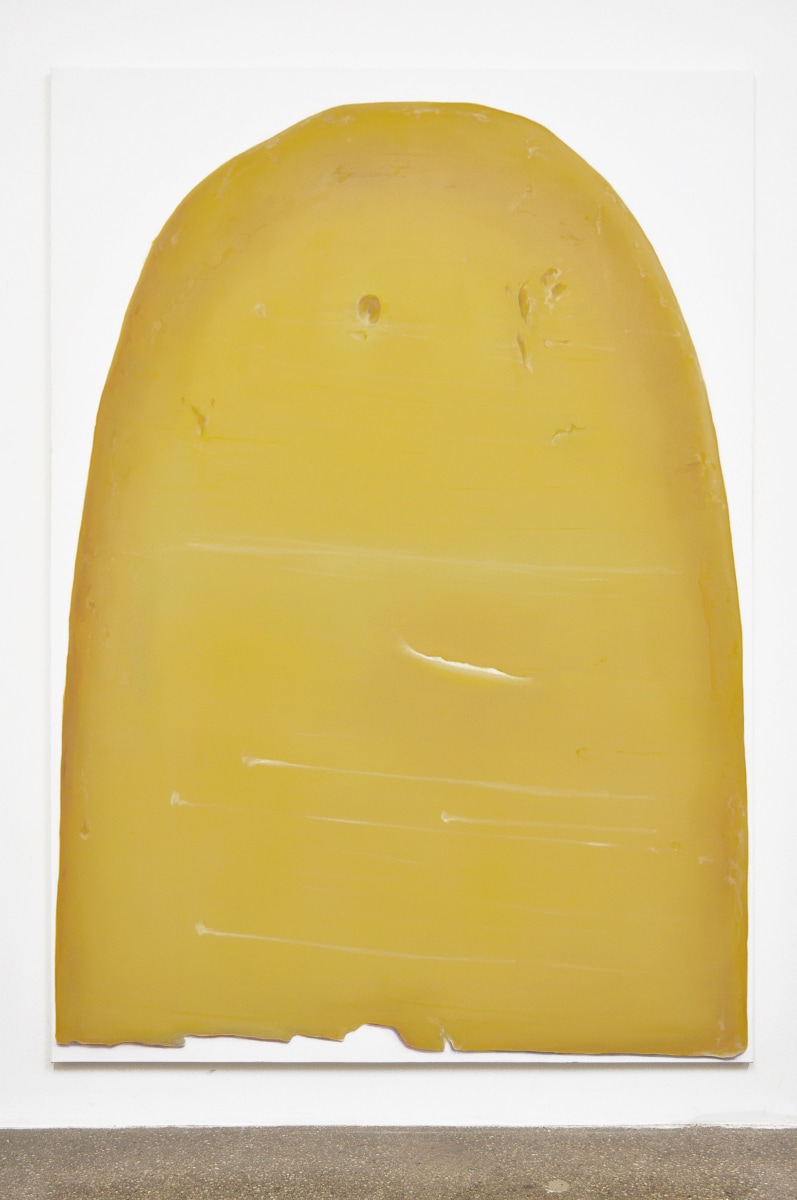 Robert Roest, Yellow - a minimal painting, 2020, Galerie Fontana
Why is this important to you?
It's more of an observation after the cheeses were painted than I thought beforehand that it's important to me. That sacred and comical aspect wasn't necessarily important to me beforehand, I wasn’t consciously trying to put it in there, but I'm very glad it turned out to be there. In a more general sense, I do think that there should be room for the comic within the sacred experience. The Dutch author Gerard Reve understood this, and I think he used it like no other. Caricatured may not have been the right word on my website, comical is better.

You painted the slices in a very realistic manner. Is that hard to pull off?
I must say that these works were created in a short time. Not many hours of painting. That's because I mostly used yellow and white, with a few other colours. I almost didn't have to clean my brush for a new colour, and that makes a huge difference. The scratches and cracks in the cheese are quite easy to make with an old bad brush. With little fuss and fiddling, I was able to quickly paint a convincing slice, I was a bit surprised myself when I noticed that it was so easy, and yet achieved the desired effect. Well-painted paintings are often painted smoothly. 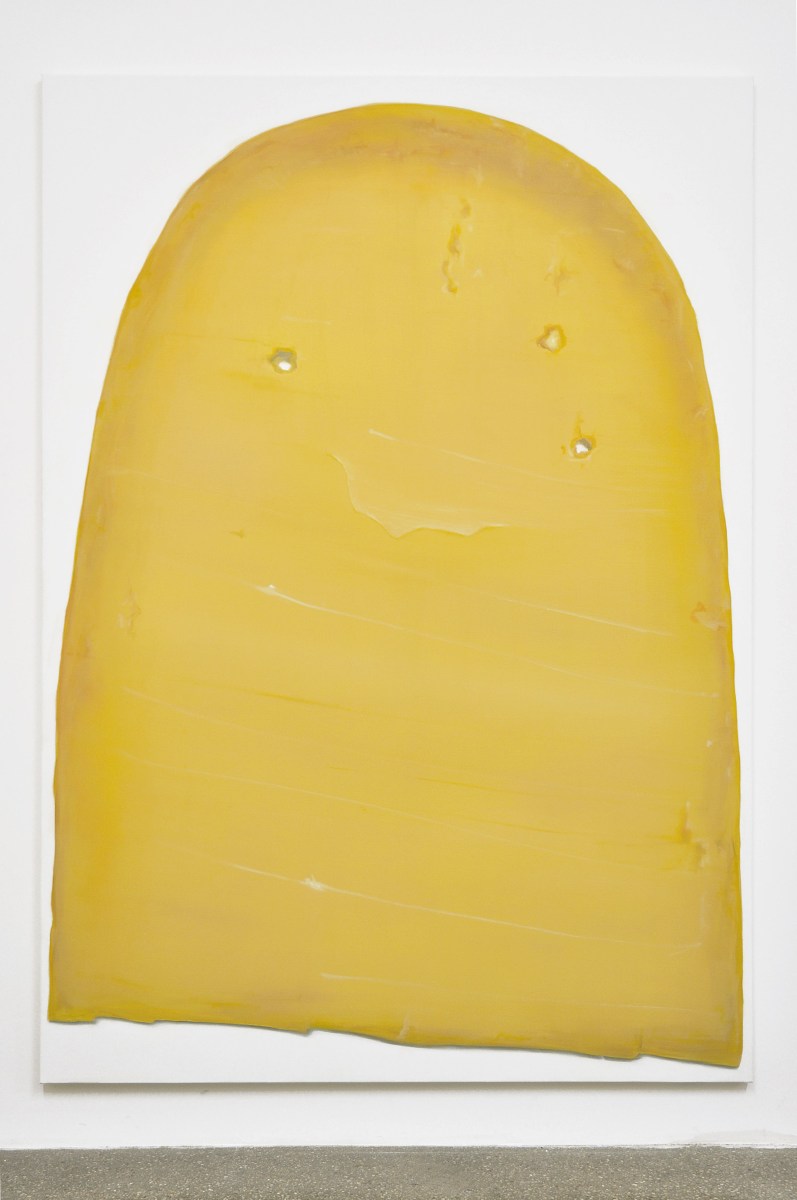 Robert Roest, Thinking of you - a romantic painting, 2020, Galerie Fontana

That realism puzzled me as a viewer and made me question how seriously should I be taking this fairly mundane subject? Is that something you play with more often in your work?
How seriously should the viewer take these works? I'm happy with every viewer, and if a viewer doesn't take this work seriously in a good way, I'll have a drink with him or her! In my work I try to make room for light-heartedness and wantonness as well as seriousness. Both, and everything in between, are aspects of the human experience, and I find everything about that human experience interesting and rewarding. That doubting of the viewer is what I hope for and try to play with. My work is about perception, illusion, representation, interpretation and I like to put the viewer on the wrong foot. When people start to doubt what they see, if our eye and our mind do not immediately coincide, and we therefore have to suspend our judgment, I have achieved something and I am happy.

The titles of the works in the series each refer to a different way of painting/art movement while they are all painted realistically. Can you explain why you did that?
The references to those movements are intended as mental glasses for the interested viewer to look at the work. How we look at and especially interpret the things around us is largely determined by our mind and not by the thing itself. It is also an expression of indebtedness to the tradition of art and painting in particular. I do not stand alone as an artist, whether or not original, I find myself in a visual and conceptual language field whose grammar and vocabulary was mostly established before me. I try to speak that language in a stylish and meaningful way.

Many of your series depart from your fascination for the relationship between digital media and painting. Can you explain why this relationship interests you?
I love the old masters and the tradition of painting immensely, and increasingly so, and I love the aesthetics of the digital world. Both aesthetics are visual languages that can say something if you master those languages, and if the viewer understands them. Tradition is the foundation of our visual language, the digital visual language adds new visual language to it, and for a broad visual 'vocabulary and grammar', a wealth of language I want to use both, and combine them if necessary. 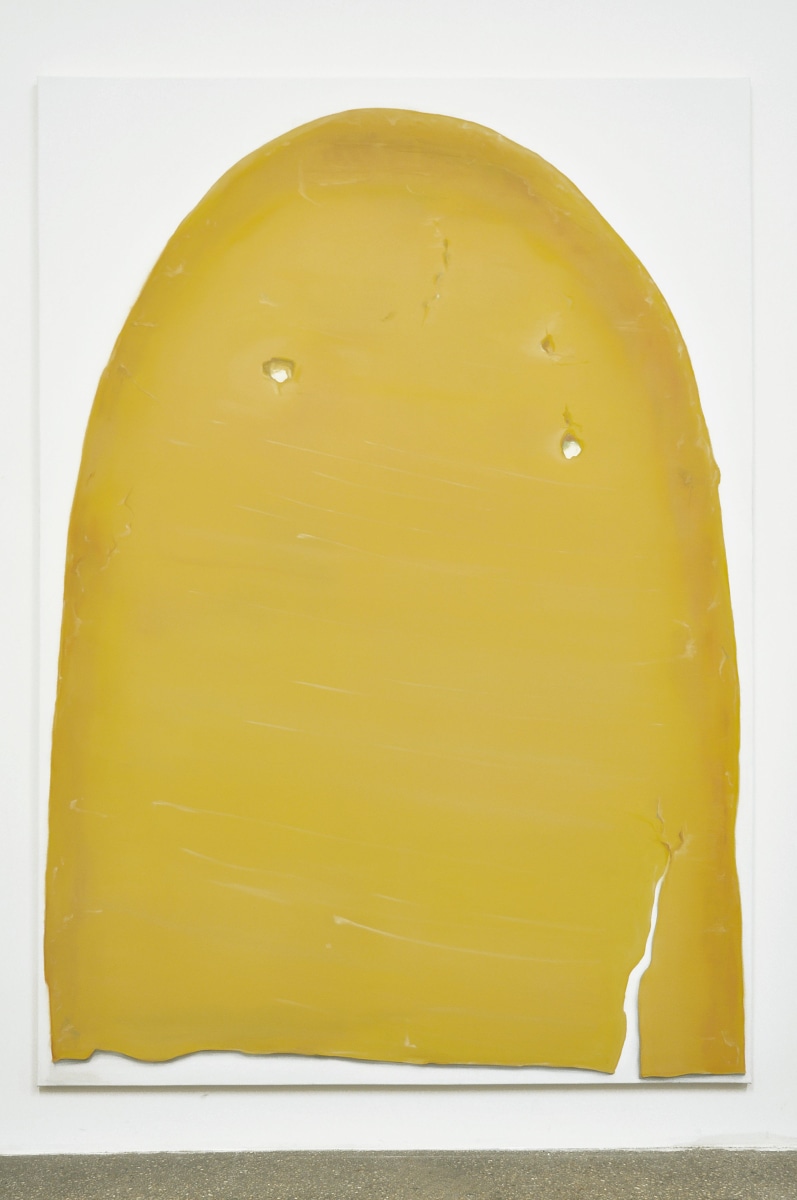 Is the Casus series an exception to the other series because it lacks attention to digital media?
The Casus series is more or less an exception. You don't see the digital part of it. Yet, it is there, albeit in a minimal way, as the cheeses I painted were less elongated in reality. I made them longer with the computer.

Hidden Hidden Remains with work by Eva Spierenburg, Matthew Allen and Robert Roest can be seen at Galerie Fontana until 16 July. After that, the exhibition can be visited by appointment throughout the summer.
Dans cet article