Nathalie Duivenvoorden was born in 1988 in Leiden.
She graduated in 2011 from HKU, University of the arts Utrecht.

Art starts with a location. A certain position, a view and a perspective chosen by the artist to guide our thoughts. This artist's view is all compassing, according to Nathalie Duivenvoorden. With an awareness of her own she mindfully picks out fragments with her camera, and chooses a moment to draw from hundreds of photographs. She realizes that she will most likely observe the chosen piece of land - forest, city or wasteland - for the last time on paper. From then on it belongs to the realm of art, as if she has placed the landscape in a box in order to preserve it for later.

That is exactly what Nathalie wants to achieve with her work: preserve the world. Art is her primary repository and the artist is the curator: she chooses what to draw from her photographs, what to save from her own environment. She can move herself, make a choice to travel by train instead of the bicycle or go on a journey far away, but the landscape remains a mirror image of her presence: a self portrait.

If she would return to the same place at a later point in time, it could have suddenly disappeared. Our surroundings are under stress, although it is not the classical nature that is depicted in the drawings. The moment you call something nature, you place yourself outside of it, according to Nathalie. She designates the urban environment as the new nature, the metropolis, a new jungle filled with dangers, just as a dense forest once was. The buildings, the roads, the way we live on top of each other in our country, that also deserves attention, and a place for later.

Light plays a prominent role in all of her landscapes. A dual role: light is a source of life, but at the same time the sun could just wipe us away in an instant. Light allows the camera to function and the artist to see what she draws. But the dark will focus all her senses. And it is in the dark where you can look beyond this world. In her recent work Nathalie’s gaze is often aimed at the sky. You will encounter clouds and luminaries, treetops and industrial fumes. But the sky can also function as a window into the future, when we will have to travel to another planet.

That concept of escapism is a factor in Nathalie’s decision to preserve the world in her art. We are at a crucial moment in time and burgeoning changes are coming to the surface. With rivers that are unable to freeze up, with seasons that have changed ever so slightly. In the hustle and bustle of daily life we forget to gaze at the sky, we don’t even notice what Nathalie refers to as ‘the silent shifting reality’. But in her drawings everything grinds to a halt, time has stopped. Even more than a location is the moment Nathalie captures. In a way the world poses in her drawings for later.

In the grand questions of our time, about the environment and the arrangement of our changing landscape, it is easy to disappear as a person. But not if you choose a position, as can be seen in the work of Nathalie. The drawings allow you another look until you will observe: the beauty of the personal environment and the responsibility that it entails. They are always places where humanity and environment intertwine. Out of love or out of protest: the landscape is the bearer of our place in the world.

Together the drawings form an ode to the world, whether it’s planted with green trees or cast from grey concrete. A world to share now so we can enjoy it later. And perhaps to take with us later on, into the sky. 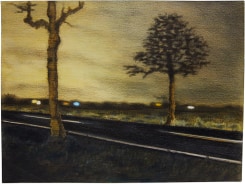 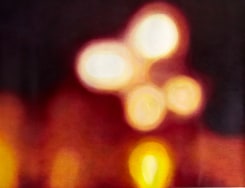 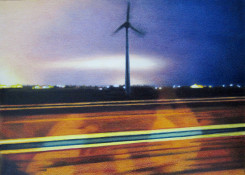