Lives in Gent. Works in Gent.
Represented by: 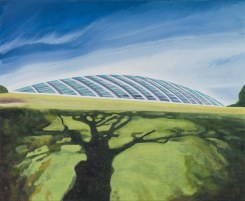 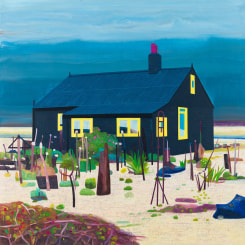 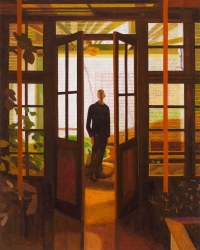 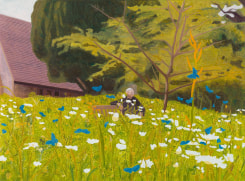 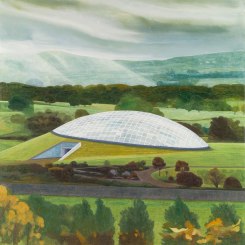 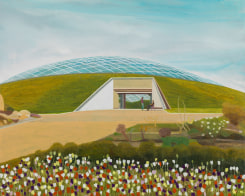 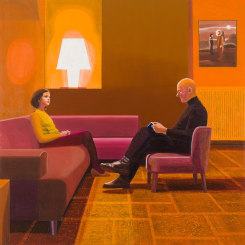 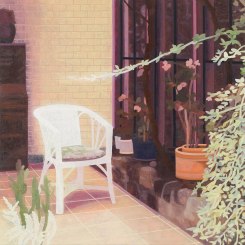 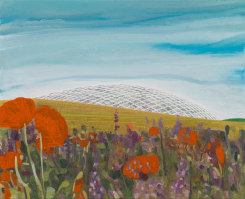 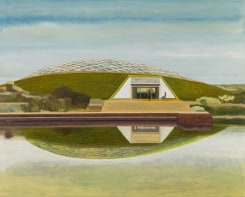 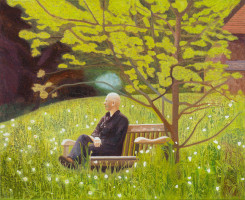 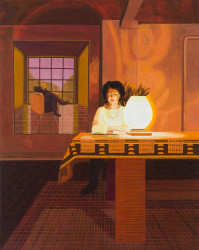 JozefienVan Beek
Do Trees Have Dreams? 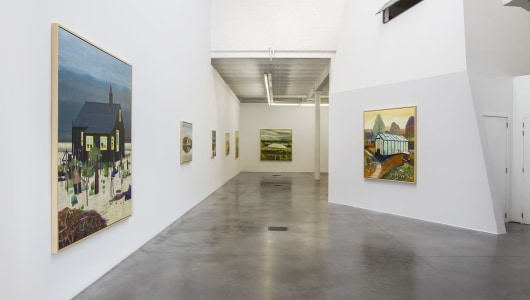 1957 Hans Vandekerckhove is born into the Vandekrckhove-Pottie family in Ingelmunster, in ghe Belgian province of West Flanders, on 12 October. He is the second of five children, who will grow upwith the scent of turpentine and oil paint. Father Jan is a talented draftsman and portraitist, mother Martha too, has a keen interest in art.

1963-1968 Much time is dedicated to drawing: a cartoon version of Hendrik Conscience’s The Lion of Flanders, illustrations to Norse and Greek myths. Translates even television pictures into drawings from very early on: New Year’s ski-jumping at Garmisch-Partenkirchen, the final sprint in the Tour of Flanders, classic bicycle race… At the Ghent Museum he sees Hieronymus Bosch’s St.Jerome fort he first time. The work is later to inspire the Stalking Hieronymus paintings (2002-2003)

A happy childhood is often spent with his godfather Raf, the childless uncle gardener and naturalist living on the Lampetten estate. Here seeds are sown for the painterly fascination for gardeners in greenhouses and enclosed gardens .

1969-1975 Studies Latin and Maths at the St.-Jozefscollege, Izegem. Makes innumerable drawings and etchings, among other things of Dante’s Inferno.

1975-1979 Studies art history at the University of Ghent. The subject of his graduation thesis is the art of David Hockney.

1980-1981 The first blue paintings of 1980-81 show the motif of the solitary figure of contemporary St.Jerome, often in a night-time interior.

Meets his later wife Christina Declercq and moves to Brussels where he makes his debut as an artist. Baron de Bethune of Kortrijk introduces hi mto the architect Hoppenbrouwers, who has the idea to set up an arts centre in Sint Lukas Art School Brussels. Hoppenbrouwers entrusts

Vandekerckhove with the responsability of developing this project and later buys the 1982 painting Grass hut.

Travels to Berlin and visits the much talked-about ‘Zeitgeist’ exhibition. Makes a series of paintings about the Berlin Wall: naked, often crouching figures set among graffiti and barbed wire. Birth of son Artuur

1983 Spends the summer on Dartmoor and in St.Yves and thereafter makes a series of paintings of nomadic figures in the landscape.

Meets Karel Geirlandt, inspirer and one of the founding fathers of the Museum of Contemporary Art, Ghent (now SMAK) and Willy van den Bussche, founder of the PMMK Museum of Modern Art, Ostend, who both follow and support Vandekerckhove’s work.

1984-1986 Moves to Ghent, where he originally has his studio in the Bernard Spaelaan. Gives up his Brussels job at Sint-Lukas Galerie to become a full-time artist.

Art dealer Marc Deweer gets to know Vandekerckhove’s work through the ‘Prizewinners’ exhibition at the Museum of Contemporary Art, Ghent.In 1986 Vandekerchove is selected by Deweer Art Gallery for his first solo show in their newly built gallery for international contemporary art. Exhibits paintings of seated figures in claustrophobic interiors.

Invited to Washington DC to exhibit in ‘Belgian 20th-Century Art’ at the IMF and at Denise Cadé’s gallery in New York.

1987-1988 Winst he Dutch Kunstbeeld prize and has a solo show at het Brakke Grond, Amsterdam.

Moves to a nineteenth-century factory building in Ghent-centrum, where he lives a secluded life with wife and children Artuur (°1982) and Laura (°1988).

Has a passion fort he literature of Thomas Mann, Gerard Reve, Samuel Beckett and Céline, a.o. Leaves his ivory tower chiefly to travel and to make long walks.

Exhibits the paintings Sacra conversatione cycle, inspired by the Book of Revelation, at the Deweer Art Gallery.

1989-1996 Spends the summers in Tuscany and Umbria where he becomes fascinated by Late-Medieval and earlyRenaissance painting. Giotto’s frescos in Assisi and those of Fra Angelico in Florence in particular form the foundations of his own pictorial vision. Exhibits the series Illuminiations and Cimabue at the VMHK (Friend of the Museum of Contemporary Art), Ghent, in 1990. In the summer of 1990, many paintings go up in flames in a raging fire in the studio.

1997-2001 The death of Hans Vandekerckhove’s uncle Raf and the visit to Dungeness form the foundations of the exhibitions ‘Een schilder is een tuinman’ (A painter is a gardener) and ‘De hof van heden (The Garden of Eden/Today). Also draws inspiration from the castle garden of Paule and Karel De Boeck (Mariakerke) and the garden of Paul and Magda Geerts (Veltem). ‘The Garden’, says Vandekerckhove in an article published in De Tijd (P.G., 06.03.1999), ‘is the domain of childhood. It also refers tot he first beginnings, the origin, when creation and love coincided.’

Daughter Laura provides the inspiration for various paintings during travels to Cornwall and Scotland.

2002-2005 Paints the triptych Garden of Eden for Brussels Airport. The art collection has been liquidated in 2018 but the paintings have been adopted by one of the most important private Belgian Art Collection. Selected for the exhibition ‘De tuinen van Granada’ (The gardens of Granada) at Mu.Zee Ostend. A short stay in Granada at the invitation of the museum. David Hockney’s painting A bigger Splash(1967) inspires Vandekerckhove to paint A bigger splash in Granada. The selection receives widespread critical acclaim and the painting is acquired for the Mu.ZEE collection. As a consequence, Vandekerckhove is invited in 2003 for a solo show (‘Stalking hieronymus’) at Mu.ZEE.

Temporary integration of two large paintings into the façade of the Groot-seminarie in Bruges as part of the exhibition ‘Soul’ (2005).

2005-2007 Experiences the enduring lure of the nomadic Romanticism of landscape and the sedentary security of the studio.

At the book launch ‘My Head is my only Home’ Vandekerckhove cooperates with Philippe van Cauteren, director of SMAK, Museum of contemporary Art in Ghent to setup an exhibition with works from private and public collections. At the same time a selection of paintings is on show in Madrid, in the Fundacion Amberes: .’La mirada ciega’, a dialogue with works of Juan Muñoz.

Spends summer in the French Alps for a walking journey in search of a mountain greenhouse.

The Liedts family supports with her art foundation Liedts-Meesen the second publication of Vandekerckhove ‘Picture Palace’ and offers him a solo show in their art space Zebrastraat. This space is a platform for new technology and honours yearly a remarkable artist.

Hans Vandekerckhove leaves for a journey through the US and gets fascinated by the landscape of Death Valley and the surrounding national parks. However, the overwhelming desolated beauty of the US landscape can not be catched in a painting.

2010-2014 Research of modern and contemporary architecture as a painters motif. Can architecture function as ecological and spiritual shelter?
Starts up the project ‘Watching the Architect’, which results in monumental paintings inspired by Mies vander Rohe, Peter Zumthor e.o. Meets journalist Kristien Bonneure, author of Stil-Leven. Bonneure writes about the sound of Vandekerckhoves paintings, published in the exhibition catalogue of White Cube Art Gallery (BE)

Fascination for the light of water results in the solo exhibition curated by W.van den Bussche, ‘Something in het Water does not compute’, the first solo show at NK Gallery, Antwerp

2015-2018 For Hans Vandekerckhove painting is a haven and a refuge, a shelter, an enchanted an enchanting space. The painted Greenhouses, landscapes and austere modernist buildings figure in an overview published in ‘Gimme Shelter’, with tekst by Eric Rinckhout and introduction by Oscar van den Boogaard.

With the experience of nearly four decennia of building an oeuvre, he realises that what matters is the intimacy of the personal world, the interaction with his beloved.

This results in the Christina Paintings series in 2017. XII paintings about love for daily life and his woman and companion Christina.